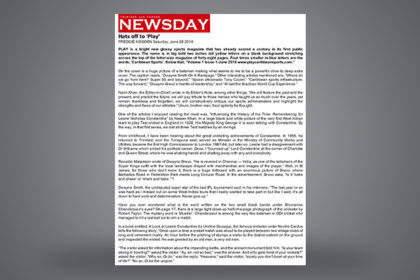 PLAY is a bright new glossy sports magazine that has already scored a century in its first public appearance. The name is in big bold two inches tall yellow letters on a blank background stretching across the top of the letter-size magazine of forty-eight pages. Four times smaller in blue letters are the words, ‘Caribbean Sports’. Below that, “Volume 1 Issue 1-June 2014 www.playcaribbeansports.com.”

On the cover is a huge picture of a batsman making what seems to me to be a powerful drive to deep extra cover. The caption reads, “Dwayne Smith On A Rampage.” Other interesting articles mentioned are, “Where do we go from here? Super 50 and beyond;” “Sport aficionado Tony Cozier”, “Caribbean sports infrastructure. The way forward;” “Dwayne Bravo’s mantle of leadership,” and “At last the Brazilian World Cup Experience.”

Naim Khan, the Editor-in-Chief, wrote in its Editor’s Note, among other things, “We will feature the past and the present, and predict the future; we will pay tribute to those heroes who taught us so much over the years, yet remain thankless and forgotten; we will constructively critique our sports administrators and highlight the strengths and flaws of our athletes.” Uhum, brother man, food aplenty for thought.

One of the articles I enjoyed reading the most was, “Influencing the History of his Time. Remembering Sir Learie Nicholas Constantine” by Nasser Khan. In a large black and white picture of the very first West Indian team to play Test cricket in England in 1928, His Majesty King George V is seen talking with Constantine. By the way, in that first series, we lost all three Test matches by an innings.

From childhood, I have been hearing about the great cricketing achievements of Constantine. In 1955, he returned to Trinidad; won the Tunapuna seat; served as Minister in the Ministry of Community Works and Utilities; became the first High Commissioner to London 1961-64, but later on, Learie had a disagreement with Dr Williams which ended his political career. Once, I “bounced up” Lord Constantine at the corner of Charlotte and Queen Street, where he was shaking hands and chatting away with any and everybody.

Renaldo Matadeen wrote of Dwayne Bravo, “He is revered in Chennai — India, as one of the talismans of the Super Kings outfit with the local landscape draped with merchandise and images of the player.” Well, in St James, for those who don’t know it, there is a huge billboard with an enormous picture of Bravo, where Barbados Road in Federation Park meets Long Circular Road. In the advertisement, Bravo asks, “Is it ‘bake and shake’ or ‘shark and bake.’”?

Dwayne Smith, the undisputed super star of the last IPL tournament said in his interview, “The last year or so was hard as I missed out on some West Indies tours that I really wanted to take part in but like I said, it’s all down to hard work and determination. Never give up.”

Have you ever wondered what is the word written on the two small black bands under Shivnarine Chanderpaul’s eyes? On page 17, there is a large tight close-up half-of-a-page photograph of the cricketer by Robert Taylor. The mystery word is ‘Mueller.’ Chanderpaul is among the very few batsmen in ODI cricket who managed to hit a last ball six to win a match.

In a book entitled, A Look at Learie Constantine by Undine Giuseppi, the famous cricketer writer Neville Cardus tells the following story, “Once upon a time a cricket match was about to be played between two village clubs of long and vehement rivalry. An hour before the pitching of stumps a visitor to the district walked on the ground and inspected the wicket. He was greeted by an old man, a very old man.

“The visitor asked for information about the impending battle, and the ancient monument told him. “Is your team strong in bowling?” asked the visitor. “Ay, sir, not so bad,” was the answer. And who gets most of your wickets?” asked the visitor, “Why sir, Oi do,” was the reply. “Heavens,” said the visitor, “surely you don’t bowl at your time of life?” “No sir, Oi be the umpire.” 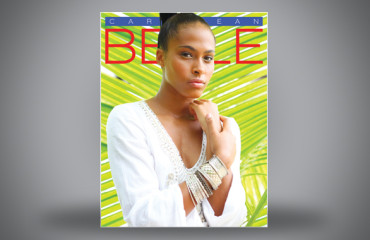 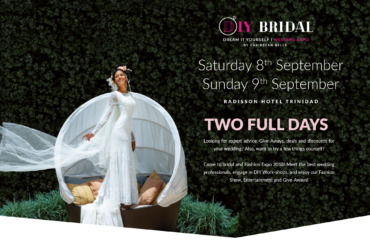 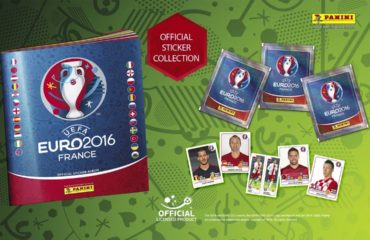